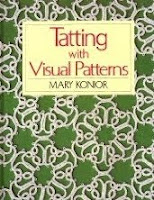 I was asked recently what some of my favorite books on tatting were. Since I tend to prefer those with good diagrams and smaller projects, these are the winners for me:

Tatting with Visual Patterns by Mary Konior is beautifully illustrated and charted. A must have for any tatter. A friend pointed out that the book seems to be out of print (I noticed a used one on Amazon for over $100!) so if you come across one, be sure to snap it up.

A little tome that I often return to get ideas for those bits of thread left on my shuttle is Tatting Collage by Lindsay Rogers. Nicely charted very small projects that can used in a variety of ways... and her collages are beautiful! 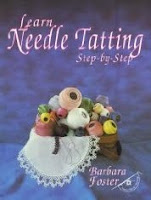 I have to put in a plug for probably what were the first two books on tatting I ever purchased. The first was Learn Needle Tatting Step By Step by Barbara Foster. Yes, in the beginning I was a needle tatter! I think I produced one of the motifs in this book about 10 times before I got it right. Although not long after my foray into needle tatting I got the hang of the flip and went completely on be a shuttle tatter, however, I am not by any means a shuttle tatting snob and I'm sure there are those of you out there who know exactly what I mean. Why is it some people get some kind of superiority kick out of knocking other's crafting ... so silly. I've seen gorgeous needle tatting and poor shuttle tatting.. it's not the tool, it's the crafter. 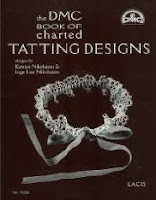 The second book I ever bought, but my first on shuttle tatting was The DMC Book of Charted Tatting Designs by Kirstine Nickolajsen and Inge Lise Nikolajsen. I still have the very first doily I tatted from this book ... what an example of uneven tension it is, but great to look at and see where I once was. I would be amiss not to mention, Easy Tatting and Celtic Tatting by Rozella Linden (aka Ruth Perry). In fact, any of her books are keepers! I've had the pleasure of being her student at several classes given at the Finger Lakes Tatting Guild's Lace Days in Hector, NY and I always learn something new.

A couple books worth mention, not for their patterns, but for the information they contain about the history and art of tatting are Tatting: Technique and History by Elgiva Nicholls and The Complete Book of Tatting: Everything You Wanted to Know but Couldn't Find Out About Shuttle Lace by Rebecca Jones. Books like this offer us more in depth knowledge about this beautiful craft that's important for any hobbyist, professional or teacher.

I just realized this is turning into a top ten of favorite tatting tomes! Here are the two that round out that top ten. Perhaps not a book for beginners (it is well charted, but has minimal directions), but 24 Snowflakes in Tatting by Lene Bjørn is a joy. One day I will challenge myself and tat all 24 in order! My last mention today, Tatting Basic Patterns by Rosemarie Peel, is great for beginners and I believe out of print already (and it just came out in January 2009!). Again, lovely simple designs for anyone and well charted.

I'm sure others have favorites too. Let me know what yours are! I'll take a look another time at my favorite web sites for tatting.
Posted by Sheryl Coleman at 8:40 PM