I learned to crochet and knit from my mother when I probably eight or nine years old. I never took much to knitting, but wow was crocheting those long chains fun! One of my fondest memories of crocheting ever was that big light blue ball of chains that was my first real creation!

In the years since that time, I have crocheted on and off and explored other fiber arts, but in recent years I've pretty much defined myself as a shuttle tatter, although I always seem to have some crochet project going on the side.... then... I hear that CGOA's Chainlink conference will be in my own back yard, relatively speaking of course - Buffalo, NY. I had attended once before. In 2003, Chainlink was held in Chicago, my relative backyard at that time. It seemed to good to pass up! 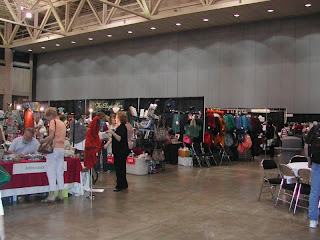 So last week I attended the 2009 Chainlink Knit and Crochet Show in Buffalo, NY. I signed up for the Professional Development Day, took four classes over a three day period and had a great time! More importantly, I came back with lots of ideas for the new shop! It's really exciting to be able to geek over crochet, knitting and other fiber arts without your listener's eyes glazing over within thirty seconds! 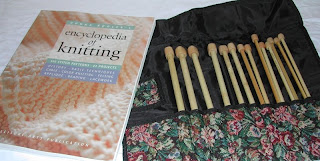 Oh, and if you believe in messages from a higher power, I got one while at Chainlink! I won two door prizes in the course of my time there. One was Donna Kooler's Encyclopedia of Knitting. I love this kind of book! Filled with swatch examples to peek the imagination, and since I don't often follow a pattern, it's a great resource for me. My other doorprize? A set of Takumi bamboo knitting needles from Clover! Is there a message here? Time to hone up on my knitting skills, I think!

So, as I pick up those knitting needles over the next few days (I promise I'll try not to swear as I do!) I'll be blogging about some of the things I did at Chainlink, skills learned, projects completed and ... items purchased!
Posted by Sheryl Coleman at 8:30 PM